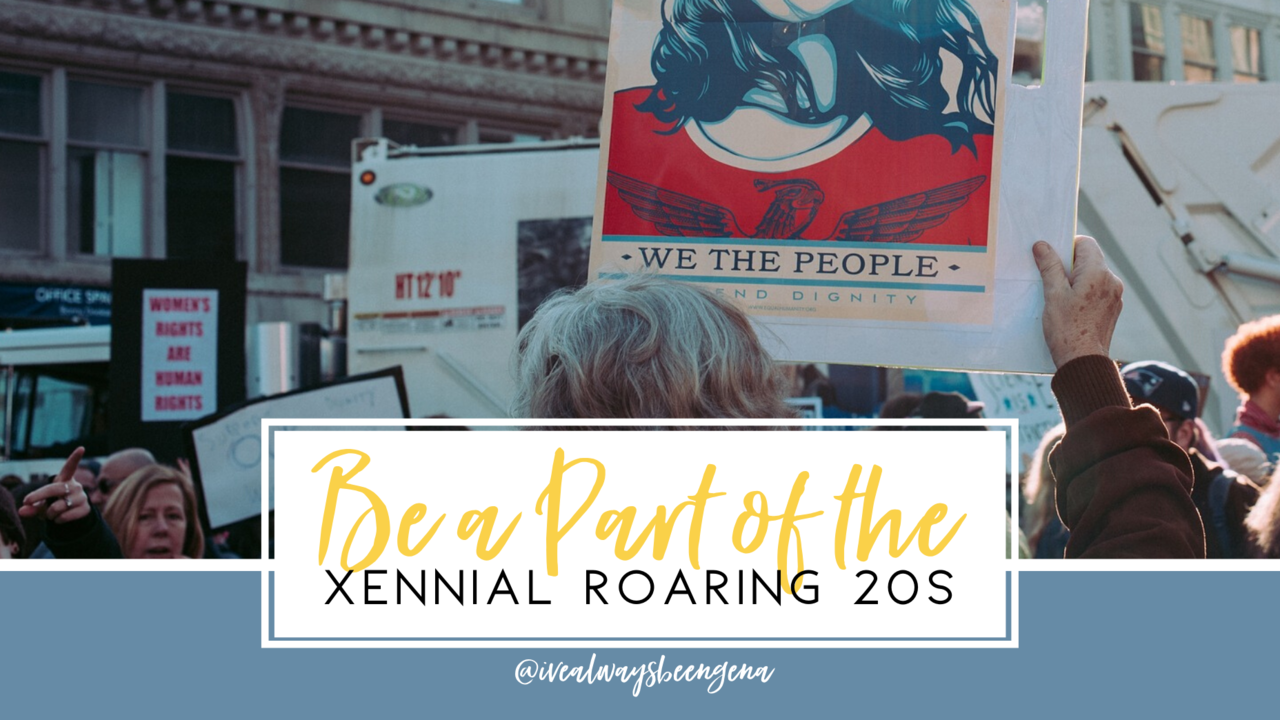 If you’re an Xennial, you are the best prepared to make the next “Roaring 20s” successful as a fempreneur and for you and your family. Would you like to know how?

Maybe you’ve been thinking about this next decade a lot like I have over the past few weeks. The dreamy state of what it was like during the Art Deco period of the 1920s before the Great Depression turned the world’s glittered champaigned sky to grey, and if that will be the fate of the next ten years. I love a good period piece and the world of Downton Abbey is as binge-watchable to me as “Baby Yoda” is on Disney+. What I find quite interesting about many of the series set during the 1920s is that they usually end right before everything takes a crap.

As a business trainer for women birthing and raising their own businesses (aka #BizMoms), I do find myself worrying and caring about how each of my clients could remain in business should something like the Great Depression strike. I think about the difficult season of the Great Recession of 2008 which I was able to survive through and led to me beginning my own #BizMom journey. Many of the women who join my challenges and then proceed to attend my membership #BizMom Mindset Academy are in my generation of Xennials, the micro-generation between GenX and Millennials, born between 1977 and 1983. For many of us the Great Recession hit us right when we were starting to build our lives and get some footing. We weren’t like the Millennials, just out of college or still in college, or the GenXers who had already made some big decisions for their lives. No, we are the in between, and so we were just buying our first homes, getting additional benefits at our jobs, and starting families. We were hit right where it could make the most impact. We were told to put on the breaks, right when we were building momentum.

Now, don’t get me wrong, I don’t believe that one person’s suffering is greater than another’s or that someone’s success should mean less because someone else’s isn’t the same. I know that every generation the Great Recession was impacted. The findings though, and my lived experience tells me that the ones who needed to transition from their game plan the quickest were of my generation, the Xennials. So as we move into what could possibly be the next “Roaring 20s”, I wanted to share with my fellow Xennials how we keep preparing ourselves to be the generation that ultimately makes the biggest impact in the next decade for ourselves and our families. The fact is, we’re the ones who know how to turn our lives in the direction of prosperity the fastest, so let’s not wait until 2029 to do it.

I’ve compiled a list of By-Gone Day Lessons for us on who made the best out of 1929 and 2008, to focus on creating skills & determination during the next decade:

LET’S BE THE GENERATION THAT STOPS CREDIT CARD DEBT

I know I am not alone here when I say I’ve been able to get myself out of credit card debt several times. You know how to do this, and you aren’t naive enough to believe that you need them to have good credit. Over the next decade, don’t put yourself in the line of the target to be stuck with credit card debt when the next recession or depression hits. Be smart about our spending and investing (Remember those interest rates mean you’re investing in that credit card company every month!). You have lived on less than you are living on today, so do it again and pay those suckers off.

IT’S TIME TO STOP BELIEVING EVERYONE WANTS YOU TO BE A MILLENNIAL.

Do you feel like even though they get picked on repeatedly, somehow the Millennials in your life or company are deemed “the cool kids”? When speaking with other Xennials you’ll find this to be a truth for many of us. You want to be noticed, because, hello, you are the middle child generation, and in order to be noticed you’ve done a really good job in life and work of taking on the traits of the generation that gets the most attention, right? You are annoyed by them too but for some reason their system seems to be working right now, so in order to recover some of what, in my opinion, was literally stolen from you because of the Great Recession, you’ve created this belief in your head that the world wants you to be a Millennial. The world wants you to be that overconfident,  jump in without a plan (even though you made one but didn’t tell anyone), and go on tangents about minimalism but never talk about sustaining it. Well, Mama, I want to finally give you permission to call bullshit on this cultural jail sentence. You are not a Millennial you’re an Xennial and you’re way effing smarter and experienced than you’ve let anyone see yet.

EFF U TO MINIMALISM, LET’S SMOKE ‘EM WITH SUSTAINABILITY

One trait you learned from your grandparents and most likely during the Great Recession was that retaining life as normal means better than just surviving. As you head into the 2020s, it’s important for you as an Xennial to think about what you want your life to look like CONSISTENTLY. If there is anything you can learn from the Great Depression and Recession is that history doesn’t repeat itself the same way. There are similarities but it will always have it’s own special twist. Expect something to happen but for it to be 10% different than the last go around. As an Xennial you have the biggest opportunity to invest in areas of your life and the economy that will help you continue to sustain the life you want to live in the 2020s, 2030s, 2040s and then some. Ask yourself where are you making consistent commitments to live the life you want to live? Are you making investments in your health? Have you taken time to invest in learning what it means to for you to have an estate or financial freedom? When was the last time you invested in your business more than a week’s work of Canva social media posts to turn a profit? Is it time you finally took this building a long-term business seriously or are you cool with it being a here today gone tomorrow event?

One of the biggest lessons as a business owner and a mother is you want to always be needed, somehow. Always. You can try to convince the world that people will always spend on things they want but no matter if it is a time of plenty or of want, you can be assured people always buy what they NEED. The businesses who are known for a product or service that is a need, always survive. It doesn’t mean you don’t have products that customers want too, it just means your MVP (minimal viable product) is something you know your customer needs to continue to thrive. When the next decade is taking us by storm or when it decides to take more than it gives you; what will you be providing to your customers that serves a basic human need? As Xennial women in business, you will need to know this answer if you want your business to be one that will sustain you and allow you to thrive. In 2030, the business moguls who are so popular today, many of them won’t last because of this important foundation to your business model. Do yourself a favor Mama, and think about how your business can serve a basic human need, and sell sell sell it! I introduce how to build your MVP (minimal viable product) to members of my #10DaystoWHY Challenge. Check to see when my next challenge will start to participate.

LISTEN TO SUZIE & DR. PHIL, OUR AFTER SCHOOL SPECIAL WITH OPRAH

Remember the last years of Oprah when the only topics for her shows were Suzie Orman for finances, Dr. Phil for a bit of drama, and the random celebrity interview? If this was your version of the GenXers “After School Special”, then let’s go down the Xennial memory lane. You and I need to take a look back at those lessons from Boomers, yes I said it, Boomers, and pay really close attention to them. Maybe you can start that six-month safety net account Suzie talked about, or you can work on Dr. Phil’s lessons on accountability of claiming what you need to acknowledge to make positive changes in your life. Or maybe you need a big heapin’ dose of reality to take a lesson from Orpah of asking yourself “What if?” a little more often. Make 2020 the beginning of a decade where you finally listen to the lesson you have heard a million times over the past twenty years. It’s time to act on them fellow Xennial, because the Boomers who are in power today were the generation that acted. They took action and made it happen. As an Xennial, you have the same recipe for success they did back then for this next decade and beyond. Take that bull by the horns and ride it, Mama!

Overall, I hope you are as excited as I am as an Xennial for the next decade. I do believe these will be the next “Roaring 20s” if we, as fempreneurs take a look at the facts above from the lessons of the last generations. You and I are in the exact correct position and act on them starting now! As a business woman, as a partner to your spouse, and as a mother, you have the opportunity in this next decade to drink from the cup of progress that only you can create. I’m calling on you, Xennial Mama with a business, to help me build a “Roaring 20s” Revolution.

@ivealwaysbeengena is a blog for women who believe the reality of their dreams is only as far as their skills and determination are willing to take them, who are raising their family while they are building their business, and for fempreneurs who desire the freedom of a life that is sustainable, purposeful, and profitable enough to invest in what matters most to them. Want to work with Genavieve Rose to learn how to keep your focus on both #MomLife & #BizLife? Then join her next #10DaystoWHY Challenge where finding your WHY leads to HOW & WHAT your business is destined to be!

Stay connected with news and updates!

Join our mailing list to receive the latest news and updates from our team.
Don't worry, your information will not be shared.